Home | Marketing & PR |Can You Really Use CBD at Your Restaurant?

Can You Really Use CBD at Your Restaurant? 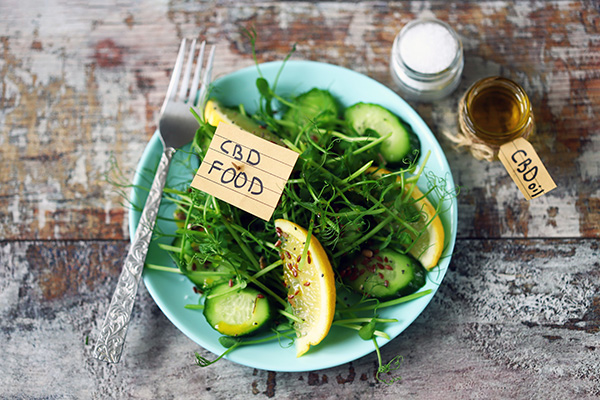 At first glance, CBD's legality among everyday consumers seems confusing enough. Can you transport it across state lines? Drive with it? Give it to your children?

These are all valid questions — people have been wondering about such things for nearly 7 years now.

But all you restaurant owners out there likely have a more specific question on your minds: can CBD be used at your restaurant?

There's no simple answer. The legality of featuring CBD alongside your restaurant's other offerings has to do with where you live, what you serve, and how your CBD is marketed. In this article, we'll be going over everything you need to know about the topic — including details on the differences between hemp, CBD, and THC, and how you might be able to use CBD while still playing it safe.

In a word, yes. CBD is more legal than it's ever been! So is low THC CBD flower. The first pro-CBD Farm Bill was passed in 2014, and since then CBD's retail market has taken off, largely free from any type of legal interference. 2018's Federal Farm Bill has benefited hemp's cause even further. As long as CBD products contain .3% THC or less, they're classified as "industrial hemp" and therefore completely legal.

Even now, though, there might be one exception to CBD's legal status. When you add CBD to foods or drinks, its legal designation changes and it becomes subject to the oversight of the FDA. And the FDA, more than most other government agencies, has had a difficult history with cannabinoids...

What the FDA says

We'll start with the good news: the FDA is currently clarifying their stance on the use of CBD as a food ingredient.

Here's the bad news: they're taking a very, very long time to do it. And in the meantime, cannabis-derived compounds like CBD cannot be marketed based on health claims. Per the FDA itself:

"FDA is aware that some companies are marketing products containing cannabis and cannabis-derived compounds in ways that violate the Federal Food, Drug and Cosmetic Act (FD&C Act) and that may put the health and safety of consumers at risk."

According to the FDA, adding such compounds to food is illegal….with one major exception:

"There are exceptions, including when the drug was marketed in food before the drug was approved or before the substantial clinical investigations involving the drug had been instituted."

The FDA goes on to say that this exception doesn't apply to CBD — even though CBD was indeed marketed in foods before the approval of CBD-based drugs like Epidiolex. If this all feels a little technical, let us explain: adding CBD into foods falls into a legal gray area. It all depends on who's interpreting the law.

Even the FDA itself has admitted that there are some loopholes in their legal interpretation. The FDA, for example, is a federal agency, which means its authority over intrastate commerce is limited.

In America, the states tend to get the final say. This explains why so many states have been able to legalize cannabis (a federally illegal substance!) without federal prosecution. In the same way, states can choose to legalize CBD-infused foods — or not.

Take California as an example. In California cannabis is recreationally legal for adult use. But CBD is still illegal if and when it's added to food, regardless of whether it's coming from cannabis or hemp! You can read the statement for yourself here. Thankfully, a bill to legalize CBD foods and beverages is on the way.

Something similar is going on in Massachusetts. Lawmakers there have issued a policy explaining that CBD-infused foods of any sort are illegal. And yet again, a bill to legalize CBD in food and beverages has been proposed.

Cities can also adopt their own pro-CBD or anti-CBD laws. In 2019 New York city banned CBD-infused foods, but last year the entire state legalized CBD-infused items again, so long as they aren't sold in the same place as tobacco or alcohol.

Long story short...it pays to know the laws in your area. We'd encourage you to do some research of your own and talk to fellow restaurant owners/operators as you decide whether or not to try out CBD.

Earlier we mentioned that — while the FDA isn't a fan of CBD or other cannabis-derived compounds — there is at least one viable legal loophole. Instead of featuring CBD, THC, or any other specific compound at your restaurant, just highlight hemp!

After all, the hemp plant that most commercial CBD is derived from is fully legal. And that means restaurants that want to err on the side of caution (while also giving their customers access to CBD, of course) can simply use hemp in their kitchens.

Incorporating hemp into recipes is easier than it might sound. Like many herbal plants, hemp is full of fat-soluble compounds, which means its essence can easily be extracted by gently cooking it in olive oil or butter. If you thought rosemary olive oil was good, wait til you try olive oil that's been flavored by hemp. Some companies are even using hemp to flavor their beer — hemp and hops are relatives, after all. In addition to being delicious and nutritious, hemp-infused dishes could provide a serious novelty factor to your restaurant and its atmosphere.

Is CBD-infused food right for you?

While hemp-infused foods really can be awesome, we'll admit it: they still might not be right for you and your restaurant. Feeling on the fence? Here are three things you can consider as you decide:

1. Are CBD-infused foods legal in your area?

If your town/city/state has laws forbidding CBD-infused foods, then we'd advise you to err on the side of caution. The fines and fees that could result from breaking the law would only add to your overhead...not to mention hurting your reputation.

If CBD-infused foods are legal in your area, on the other hand, then congrats! It's time to move on to question 2.

2. Is your clientele health-conscious?

Does your restaurant cater to athletes, yogists, or other wellness enthusiasts? Do you live in an area where people love green smoothies and prize staying fit?

If so, your clientele will probably love hemp-infused recipes (in fact, we'd bet they already do). Market hemp as the healthful substance that it is and reap the benefits accordly.

3. Are you based in an area where cannabis is legal?

Even a clientele base that isn't super health-conscious may like the idea of foods and drinks infused with hemp. This is especially true if you're located in an area where high-THC cannabis is legal; people in such areas likely already have an open mind. Hemp isn't just healthy — it can also be very relaxing — so cater to this effect if you'd like to keep the evening and weekend crowd happy.

Nicholas Rubright is a digital marketing specialist for Cannaflower – a company that specializes in high CBD low THC products. In his spare time, Nicholas enjoys writing and playing music.